Puppets accentuate the positive! Ghostly puppet apparitions floated to the music and voices of the North Grenville choir during a concert guaranteed to lift your "Spirit".  The concert showcased both choral and solo talents throughout an amazing program of thirty plus songs, presented in a range vocal styles. Visual interest was nicely accomplished through smoothly worked transitions, humourous interpretation of songs, staged vingettes, and puppetry. Choir members shared in the puppet fun too, some as puppeteers, others as playfully responsive co-actors. As Sam the Peddler puppet offered sweet deals on sticks, shakers and tambourines for an upcoming song, singers gleefully lifted the items  from secret pockets in his well modified top coat.  Later in the program, puppet Janet simply enchanted listeners during her solo of "Whistle a happy tune". This cheerful rendition was given a helping hand and voice by puppeteer-singer Sharon Wueppelman, a skilled puppet builder, and who also stepped in as coach for the North Grenville choir members during their introduction to puppetry.
Posted by Ottawa Puppetry Club at 11:18 AM No comments:

Puppets, Sam the Peddler and  Gramma Janet, have been invited to take part in "Spirit - songs to lift you, move you, delight you!"   The charming duo, created by puppeteer Sharon Wueppelmann, join in as special guests of the North Grenville Concert Choir as they celebrate spring through songs that range from spirituals to excerpts from Broadway musicals. Catch the "Spirit" on April 16 at 7:30p.m and on April 17 at 2:30p.m. at the North Grenville Municipal Centre Theatre located at 285 County Road #44 in Kemptville, Ontario, just 30 minutes from Ottawa. For tickets ($15) or information, call 613-258-9978.
Posted by Ottawa Puppetry Club at 8:06 PM No comments: 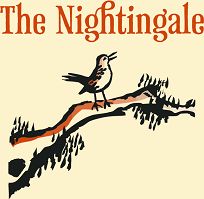 Catch the final presentations of  The Nightingale from the Rag & Bone Puppet Theatre series of family performances at the Shenkman Arts Centre.  In this retelling of the Hans Christian Andersen classic, an Emperor who thinks he has everything is humbled by the beauty of a small bird. Upcoming dates: March 27 & April 10 Showtime: 1:30 p.m. Tickets are $10 or four for $32 and are available at the door (cash only) or online at ragandbone.ca
For more information: http://www.ragandbone.ca/Pages/sundays.html
Posted by Ottawa Puppetry Club at 8:04 AM No comments:

Posted by Ottawa Puppetry Club at 4:46 PM No comments:

Pegasus: Its name derives from the Phoenician pag sus, the “bridled horse.” In later tradition, Pegasus became the symbolic mount of poets and artists because of Greek legend, which said that with a stamp of his hoof, he caused the flow of Hippocrene, the fountain of the Muses, on Mount Helicon. Thus, Pegasus became the symbol of poetic inspiration and the emblem of creative arts.  –by E. and J. Lehner (from Classic Horse Stories compiled by Christina Rossetti Darling and Blue Lantern Studio)
Posted by Ottawa Puppetry Club at 3:53 PM No comments:

"It's amazing how it always comes together.
I was able to watch the audience and I can assure you that they enjoyed every part, and the parents loved  the jokes,  like 'Cools'  introduction - caught one parent off guard, and Bobby's questioning of the # of televisions cajoled laughter from one of the fathers in particular. Even the kids understood about game shows and not wanting to be interrupted, and  the elephant's extension got a  very good chuckle. And the children loved it when Bob's knucklebopper got sneezed off the stage! Well done puppeteers." -Sharon
Posted by Ottawa Puppetry Club at 11:37 PM No comments: